I-Scholars International Academy > About our School

Our School is the Best Islamic School in Nigeria. We focus on scholastic development, personal growth, and ethical enrichment.

Message from the Board of Directors

I start by extending to you the noblest of all greetings As-salaamu alaykum. May the peace and blessings of Allah be upon you.

I-Scholars International Academy is an educational institution with a humble beginning.  It Started with a few Scholars (as our Students are statutory addressed), but by Allah will, it has become a citadel of learning and it is growing and progressing.

The School was founded in the year 2006 to provide students with excellent academic programs in a nurturing Islamic environment with close student-teacher relationship that prepares students to succeed emotionally, intellectually and academically.

A time marked the beginning of a creative, social, and emotional development, that is characterized by a lifelong love for learning in an Islamic environment. Every day is seen as an opportunity to move closer to the noble dream. We sought to provide qualitative education at all levels to meet the peculiar demand of Muslims yearning patiently for a glorious consistent change.

I pray that Almighty Allah (SWT) reward you abundantly, To you all I say JazakALLAH Khairan.

I Scholars International Academy is one of the foremost faith-based school established in Federal Capital Territory, Abuja. It was established in 2006, with an experiment of the system of education proposed to five close family friends, whose kids ranged between and two and three, it formally registered with the Corporate Affairs Commission and commenced services to the public for its Creche, a Pre Nursery(1&2) and Nursery(1&2) in September 2007, with about 11 scholars, then progressed to have its Primary classes(Grades1 to 6) earning its accreditation to run a primary and secondary school in 2010, over the years till present the school has established its secondary classes and preparing for its first set of graduands by year 2017 insha Allah.

Today the school now has a secondary with boarding facility to cater for students. The school’s operations and facilities are gender-based to avoid unnecessary free mixing of genders to promote morality and sense of honour and bashfulness in our scholars.

Since inception, the school has graduated three sets of secondary school students who are now in various universities around the world studying and excelling in their various chosen fields.

The vision of the founders is developing Muslim children into erudite scholars grounded in all spheres of knowledge and capable of leading the world in the light of the Qur’an and Sunnah.

Quality education that qualifies our scholars for admission anywhere in the world, and a broad understanding of Islam and other faiths, as well as proficiency in International languages like Arabic, English and French languages are part of what we offer.

Our educational system is practical-based and we place importance to Islamic moral ethics, while not overlooking international standards and best practices. This is ultimately geared towards them pursuing a career in life without losing focus of earning the pleasure of Allah.

Our achievements can be seen through rapid improvements in the education we provide. 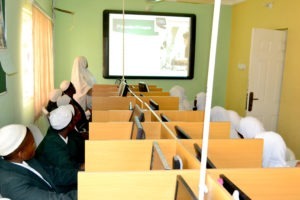 We use an integrated curriculum following Islamic ethos to serve the various class range, we continually review our schemes to address the educational needs of scholars. Our Integrated curriculum is led by the Nigerian (NERDC) revised curriculum, Cambridge Curricula, Bureau of Islamic Arabic Education (BIAE), Jolly Phonics, Montessori and other relevant countries curriculum to suit our identified gap. 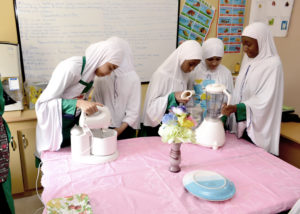 This is based on a sound Arabic curriculum for ages 2 to 16 years. As an after school and weekend program to develop them into erudite Islamic scholars by ensuring their hifz capability and Islamic character development.
The Islamiyyah session offer its services to both student and non-student of the academy. The course are formal and most importantly fun filled via friendly interaction with their Ustazs (Teachers).
The coresubjects are:

Tahfeez and After School Care

The school has a 2 option payment after school care to feed, care and teach the scholars. The After school session is another important service created ultimately to achieve the school’s goal of getting the scholars to memorize the Holy Qur’an, they are spoken to only in Arabic language during this session and get to progress faster than scholars not registered in the scheme, as their programme is scheduled as follows, they eat, sleep, pray, say their adkaars and then memorize the glorious Qur’an every day from Monday to Friday. More information obtainable in the school. We pray consistent attendees of this classes do memorize the Quran by conclusion of their JSS 3 and a year exclusive extension In sha Allaah.

“Verily those who fear Allah are of His servants who are Scholars.” 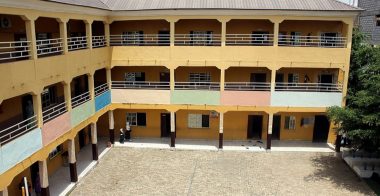 Our school is known for developing Muslim children into erudite scholars, well-grounded in all spheres of knowledge and capable of leading the world in the light of the Qur’an and Sunnah.

COVID-19 is a disease caused by a new strain of coronavirus. ‘CO’ stands for Corona, ‘VI’ for Virus, and ‘D’ for Disease.

The COVID-19 virus is a new virus linked to the same family of viruses as Severe Acute Respiratory Syndrome (SARS) and some types of the common cold. COVID-19 is a new virus and we are still learning about how it affects children.

We know it is possible for people of any age to be infected with the virus, but so far there have been relatively few cases of COVID-19 reported among children. The virus can be fatal in cases, so far mainly among older people with pre-existing medical conditions.